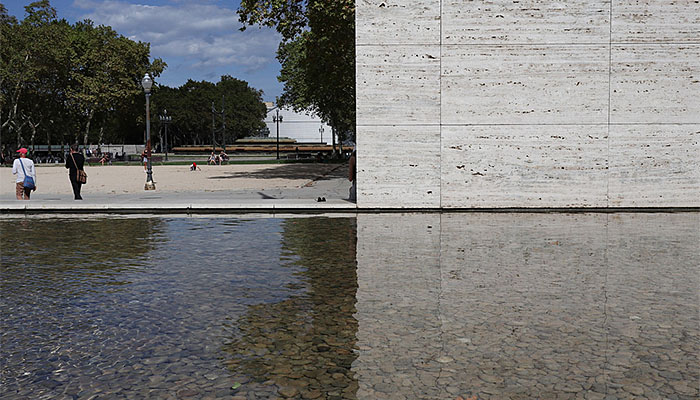 “Architecture starts when you carefully put two bricks together. There it begins.” That’s a quotation from Ludvig Mies van der Rohe, the famous German-American architect. I recently visited one of his buildings, his famous Barcelona Pavilion, which is partially pictured above. Whilst the scene might look exceptionally modern, the original building was erected in 1929 for the International Expo. It was demolished in 1930. However, 50 years later, it was reconstructed. It remains a popular place to visit today. Apart from the obligatory gift shop, the pavilion is filled sparsely with furniture, only a few Barcelona chairs. It is a particularly serene place to visit. Whilst, the Barcelona Pavillion is quietly tucked away, many of Mies’ other buildings are far more visible. In New York, on Park Avenue, there’s the Seagram Building. To the West in Chicago, there are numerous buildings by him. The common thread throughout all his buildings is that modernism and simplicity. Sometimes, simple simply works.

However, the process of making something simple, requires an idea. Coming up with ideas, especially novel ideas, is far from simple. Furthermore, to successfully execute what in the end appears simple, often requires a large number of mundane steps. Mies’ quotation about architecture starting brick by brick obviously alludes to this concept. This is just as important when it comes to markets. A trading strategy that you conjure up can often seem relatively simple. This is despite the time it can often take to develop. Often, it can be the case that the simplest bit can be the construction of the actual trading signal. However, before you get to that stage of creating a trading rule, often requires a significant amount of work, to prepare the data so it’s in the most appropriate form. This can particularly be the case, where you are dealing with an unusual dataset which isn’t nicely formatted into numerical time series, something which is being increasingly true, as we move from a world filled with unstructured data.

At the moment, I’m working on a project for Bloomberg to examine how news generated by the Bloomberg News newswire can be used to trade FX systematically. My initial results have been promising. In order to get to the stage of even thinking about how to create a trading rule, I’ve gone through several steps, to break down the problem into more manageable parts. These steps involve converting what is essentially text data into a numerical dataset that can be used to generate a trading signal. I’ve also had to put my market’s hat on, using a bit of intuition to understand which news I need to focus on for FX markets in my analysis. This type of approach of breaking down the problem into smaller parts, is of course not unique to textual news data, and can be applicable to many other trading strategies or indeed to building software more broadly. I also strive to ensure that as far (guided by intuition) as possible the end trading strategy is as simple as possible, and only adopt more complex techniques if they are really justified. Simplicity really is best – I think I agree with Mies there!

Whether it is architecture or a trading system, whilst the final outcome might appear simple, it is often the case that it is a result of a lot of hard work, involving a lot of steps along the way. It’s when the outcome is very complex, that we really need to start asking questions!

← Learn from data scientists everywhere
Do I feel lucky (trading)? →