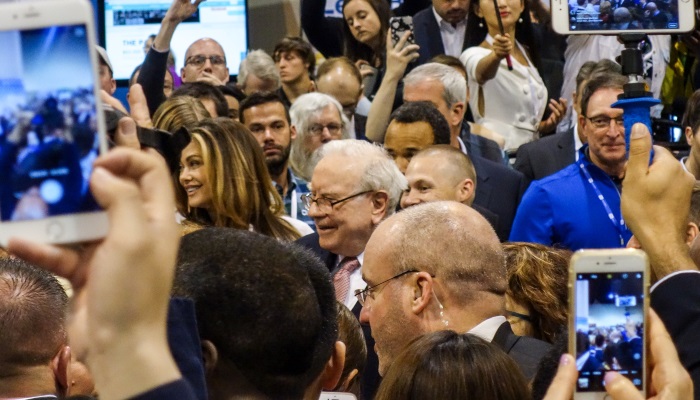 In the centre of Omaha is the Old Market district, a reminder of its nineteenth century beginnings, a time when it rose to prominence as a centre of the railroads and the meat trade. To this day, sit in a swanky steakhouse in New York or London, and there’s a good chance your steak began its journey from the state of Nebraska, of which Omaha is the capital. Omaha is over a thousand miles from New York and over five hundred miles from Chicago, the two great cities of American finance. As a result, it might seem somewhat unusual that once a year, usually in May, thousands of visitors with an interest in market descend on Omaha to attend a finance event. That event is of course the Berkshire Hathaway shareholder meeting, where Warren Buffett and his business partner Charlie Munger answer questions from the audience and journalists about Berkshire Hathaway and investing more broadly. Despite the fact that it is now streamed on Yahoo, many still make the trek (including myself, both last year and for this year’s event, which finished just before I wrote this), such is the draw of Buffett.

So what did Buffett and Munger muse about this year? Perhaps unsurprisingly, one of the first questions related to the scandal at Wells Fargo, where bogus accounts were opened, which is one of Buffett’s major equity holdings, and whether Berkshire Hathaway was susceptible to this type of behaviour, given its decentralised nature. Buffett countered that the incentive structure at Wells Fargo rewarded that behaviour. He also suggested that more broadly, he felt that instilling a strong culture like at Berkshire Hathaway helped to self select individuals, and would be more productive at stamping out bad practices versus writing a thousand page rule book. Throughout the meeting, Buffett noted that the decentralised structure of his company was a strength, and he had a strong management team in place at each of the businesses he held stakes in or owned outright.

He was also asked about other companies in his portfolio which have had negative coverage recently, notably AmEx and Coke, in addition to Wells Fargo. Buffett noted that when make an investment he looks to see where they have durable competitive advantage. Buffett ask whether management can ward off competitors? He characterised it through a metaphor. Say you have an economic castle, people will try to take it away, need a moat to protect it, need a knight in the castle to manage it. AmEx, Wells Fargo and Coke started a long time ago and have had challenges in their long history. He noted, that there will always be competition, but there will always be things you can do to ward off the marauders.

Buffett’s recent forays into tech, after a long period of shunning such investments, were also the subject of several questions, including his investment in IBM and Apple. He acknowledged that his investment in IBM had not gone as well as hoped, and indeed it has already been noted that he has reduced his investment in that company. However, he countered by saying that Apple was not really a tech company in his view, and more of a consumer company. Whilst he did not claim to own any insights into tech, he did note that he was in a good position to understand consumer demand. Still on the tech theme, both Buffett and Munger acknowledged that they hadn’t expected the success which Amazon has had. Buffett in particular felt it was impressive that Jeff Bezos, founder of Amazon, had been able to pull off two largely disparate business lines, retail and cloud computing. Munger also quipped that they had missed the Google, not only Amazon. Buffett also noted the relative advantages of tech companies, compared to the capital intensive industries of the past. You could argue though that a lot of the groundwork for this success was literally laid by telecoms firms building the backbone for internet traffic in the past.

As usual at pretty much any conference I go to, a question about AI was aired. Buffett agreed that it would have a disruptive affect, with for example self driving cars driving down insurance premium, would would impact Geico’s auto insurance business. On a broader point, he felt the advent of AI would be good for society, trying to frame it within the technical progress of the past, such as the advent of farming machinery to make agricultural more efficient.

There were quite a few questions related to China. Munger was bullish on China, noting that it was a cheap market, but could at the same time have growing pains. Buffett noted that early on in the development of markets, there is some tendency that they are more speculative at beginning. Markets have a casino characteristic (and those not been through cycles before more prone to speculate), he added. If a market gets hot, a lot of people will be attracted to it, essentially gambling, rather than investing. China being a newer market, is likely to have extreme experiences in that respect.

The theme of active versus passive investing also came up. Buffett gave a mention to Jack Vogel, the founder of Vanguard, who was attending special praise for his role in making index investing accessible. He was particularly scathing about the value of the active investment industry, where in effect failure could be rewarded. He noted that his investment mangers, Ted Weschler and Todd Combs, who manage around 20bn USD between them of Berkshire Hathaway’s capital, are compensated with a salary and dependent on the amount they beat the S&P500, contrasting it to the 2/20 structure of hedge funds. At the same time, he did acknowledge that some people could beat the market, but they were full and far between, and furthermore it was difficult to identify them in particular for ordinary investors (however, Berkshire Hathaway has outperformed the S&P500). Whilst, it is easy to share some of his pessimism concerning the active industry, I have in the past written that “passive” investments are not really as passive as you might think. After all, if our passive investment is S&P500, our strategy already overweight larger cap stocks.

Admittedly, I could have just stayed at home and heard the words of Buffett streamed over the internet, but where’s the fun in that? Just as its best to sample a steak from Omaha, in an Omaha steakhouse, perhaps it’s best to hear the Oracle of Omaha, in where else, but Omaha! And yes, in case you were wondering, the steak really is quite exceptional here in Omaha, something you still can’t really stream over the internet…