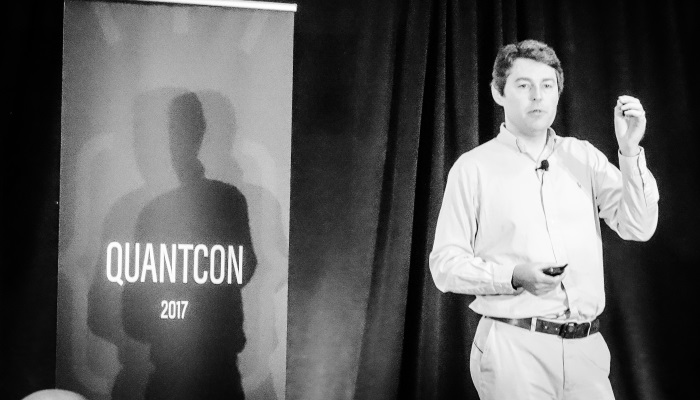 Over the past few days I’ve been in New York, meeting with clients. I also attended and presented at QuantCon NYC 2017, Quantopian’s annual conference. It was my first time at QuantCon, and I had been expecting a relatively small affair. With several hundred attendees and multiple streams, it was one of the biggest quant conferences I’ve taken part in (along with Global Derivatives). Attendees ranged from retail traders, to students, to quants working in large financial institutions. Each group had their own different viewpoints about trading. As a result, the conversations I had during the conference ended up being quite varied. Judging by my conversations with students at the event, finance is still seen as an exciting industry. This has also been my experience speaking to students at Thalesians events, who still seem just as enthusiastic about the market, although admittedly, there are many more competing opportunities, in particular in the tech industry. So perhaps there is hope the future of the finance industry? So what were my main takeaways from QuantCon and highlights from the various talks that I attended?

One of my favourite talks was given by Robert Carver, who was previously the head of fixed income at AHL. Robert is now an author, and also trades futures on his own trading book. His talk was entitled “Trading strategies That Are Designed Not Fitted”. He tried to compare the way we make cars, to that which we employ to develop trading strategies. He advocated trying to develop a framework for the creation of strategies to try to reduce the problem of overfitting. He also advocated an ideas first approach to trading strategies, as opposed to a data first approach.

Perhaps unsurprisingly, machine learning featured heavily during the conference. Yin Luo, from Wolfe Research. He discussed how his team had approached text mining of corporate filings, using techniques from machine learning. He made many interesting observations, including the tendency for corporate filings which had less numerical values (and more text), to be followed by poor performance in that stock. He also discussed how there could be benefits in understanding the differences between a corporate filing from year to year could also add valuable insight.

Jonathan Larkin, the CTO of Quantopian presented a framework for constructing a single portfolio from many sub-portfolios, which something Quantopian needs to do, when crowdsourcing signals from strategies developed by their users. He also noted the various constraints they faced, such as needing to make sure there were position limits on the final portfolio, and the fact that sub-portfolios were private, autonomous & independent. Indeed, whilst Quantopian will be given an output of trading signals from each sub-portfolio, they are not privy to the algorithm which generates the signals.

My talk at QuantCon was about developing FX trading strategies and also Python. I started by discussing the concept of FX beta which is somewhat trickier to understand than in other asset classes. Later, I presented some Python examples from my open source libraries chartpy, findatapy and finmarketpy, including an animation of the GBP/USD FX volatility surface over Brexit.

The last talk of the day was given by Marcos Lopez de Prado. He discussed the various problems associated with Markowitz style portfolio optimisation, namely the difficulty in estimating returns. At the same time the correlations between assets are also difficult to estimate. Risk parity of course dispenses with the need for return or correlation estimates. Lopez de Prado presented a different framework for thinking about portfolio optimisation, hierarchical risk parity (HRP), a hybrid, which offered better out-of-sample performance than Markowitz.

In general, QuantCon proved to be an enjoyable conference, and I hope to back in the future!