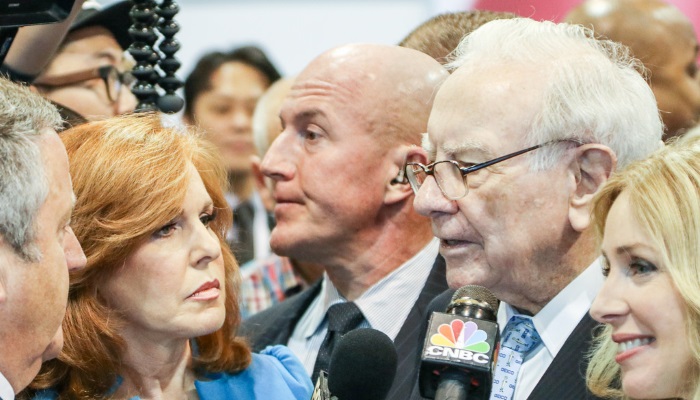 It’s that weekend in the year, when investors converge on Omaha for the Berkshire Hathaway meeting. Over the years it has grown from a relatively low key affair with a handful attendees, to today, where attendees pack Omaha’s CenturyLink Center for the meeting (which has a capacity of around 17,000). It was my third time at the conference, and it was noticeable that the queues seemed larger than last year. This is despite the fact that the conference is now broadcast live on Yahoo Finance.

The format was similar to previous years. Over the course of several hours, Warren Buffett and his business partner Charlie Munger took questions from journalists and shareholders in the audience, which they had not known in advance. So what did we learn from Buffett and Munger this year at the annual meeting? Buffett introduced the meeting with a brief summary of Berkshire Hathaway’s recent performance, noting that it had benefited significantly from the recent tax cuts in the USA. He also noted that recent accounting rules meant that equities securities now had to be marked to market every day, and could have an unusual impact on earnings. However, this simply puts him in line who hold similar liquid assets.

He also noted that it was important to have perspective on investments, comparing this to the tendency to focus on what’s happening in the market. He gave an example of the stock Cities Service, a stock he bought in March 1942, just after the USA entered the Second World War. The stock market had been reflecting the short term situation in the Pacific, which had not been favourable for the USA. Despite that he bought the stock. It immediately fell. He held on and closed out later for a short term profit of several dollars in the stock price. Had he held on for longer, he would have seen the stock price quadruple. Things had been looking bad in 1942, but he noted that everyone knew that America would eventually win the war. As a country it had been going well since 1776. He noted that if you’d invested 10 000 USD in that same year, in American business (as represented by an equity index), it would be worth 51m USD today. All you had to do was figure that America would do well over time, and hence American business would do well. That was the only investment decision you’d have to make. That was the question that investors had to answer. He contrasted that to gold, an asset which didn’t produce output, which would be worth comparatively less, around 400 000 USD. He noted there was no comparison to buying something which produces an output, versus something which has no such output. He extolled the virtues of passive investment, rather than following recommendations of an investment advisor. Stuff like what the Fed does, is immaterially in the long run, instead what is important is to stick to your philosophy.

Perhaps unsurprisingly, there were several questions about the political situation. The question of relations between China and USA came up. In Buffett’s opinion, there was a lot of common interest between both countries. Yes, there will be tension, but it’s a win win situation when the world trades. There is a gap between US imports and exports, and he didn’t want it to grow a lot. The problem was when one side wants to win a bit too much. He felt though that the situation would likely be resolved. In the USA, both Democrats and Republicans believed in free trade. The difficulty with free trade is that the benefits of trade tend to be less visible, for example, lower costs for goods, which consumers can buy, like TVs etc. However, the negatives are very apparent, such as the loss of manufacturing jobs. He noted how FDR used his fireside chats to explain to the policy, something would is important in the sphere of trade. It was important, to take care of those individuals affected negatively by free trade, who were effectively paying for the benefits of free trade for society as a whole.

On the broader political questions, whilst Buffett acknowledged he was a strong supporter of Hillary Clinton, as a company, Berkshire Hathaway did not want to take political positions, for example, in the area of gun control. Furthermore, it had not made donations to any political party (any help Buffett had given, was in his role as a private citizen, in which he spoke for himself, not Berkshire Hathaway).

He also answered a question about whether society in the USA, was more divided than event, noting there were many periods in history when we also appeared divided. During his lifetime, he lived through 14 US presidents, 7 Democrats and 7 Republican. As a whole, there would always be disagreements. However, people lived between now than they did when he was born. The country had prospered as a whole. GDP was 6 times higher per capita than when he was born. Munger also quipped that the current focus on the quality of our politicians today, somehow forget, that in the past many politicians were that great either!

There was also questions on Wells Fargo, and the issues it had with incentives, which were essentially encouraging bad behaviour from its employees. Buffett acknowledged it had faced problems, but it was now trying to address matters. He also compared to it other banks, which have also faced regulatory problems in recent years.

Inevitably, the subject of cryptocurrencies came up and the impact it could have on payments, an area which Buffett is involved in through his stake in American Express (and much smaller stakes in MasterCard and Visa). Both Munger and Buffett were scathing about cryptocurrencies. The issue, Buffett noted, was that the asset was non producing. He gave the analogy of a cheque. It was a wonderful invention. However, it didn’t necesarily mean that a cheque itself was a worth a lot of money. The only reason to purchase a non producing asset was a view that someone else would buy it at higher prices. It was a bubble, just like with the tulips, Buffett said.

It has widely been publicised that Berkshire Hathaway now owns Apple stock. In the past, Buffett has steered clear of technology as a whole. Buffett noted that he hadn’t invested in Google at the time, because he was unsure whether it’s lead would be taken (in the same way that Google overcame AltaVista). He acknowledged missing the boat in this area (and the same for Amazon). For buying Apple, his decision didn’t require him to take apart an iPhone, it was more based on the value of the ecosystem which Apple had built, and the nature of consumer behaviour which drove his purchase. More broadly he noted how the largest companies by market cap, were now more capital-lite businesses (eg. tech) as opposed to asset intensive (eg. oil).

There was an interesting question about how Buffett and Munger tried to forecast the success of one product versus another, giving the example of American Express versus Diners Club and RC Cola against Coca-Cola. Buffett said American Express hadn’t been the first credit card company, Diners Club was. American Express went in at higher price, but it had more value and better representation. It was impressive for a sales person to pull out American Express Centurion card to pay for expenses. This was not the case with the rather mediocre looking Diner’s Club card of the time. There were many different colas, but Coca-Cola was the real thing! The value of a Coca-Cola was the same now as it was in the past. Buffett said you can learn a lot by using shoe leather, getting a feel for the products. It was an important investment technique. He in particular recommending reading Phil Fisher’s book Common Stocks, which talked about this.

A subject which comes up each year are the notion of risks which could impact Berkshire Hathaway, which is a major reinsurer. Buffett suggested the probability of a massive risk event (eg. hurricane) which could wipe out 400bn USD was around 2% in his estimation. He was also asked about the cyber risks. He noted that it was somewhat difficult to a judgement of probabilities in this area, and he doubted that Berkshire Hathaway, would have the largest exposure to these types of insurance risks.

It is perhaps the last place that someone like me, a quant who tends to develop short term trading strategies is likely to attend. However, in all the times I’ve attended, I’ve learned a great deal. Hopefully, I’ll be back next year!