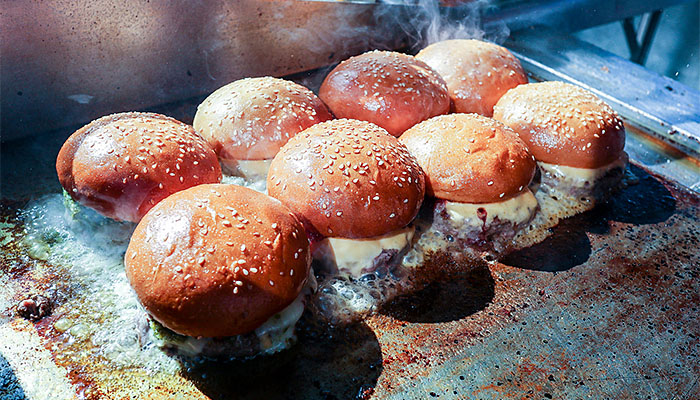 The noise, the light, the buzz. Locals look forwards, visitors look up. Yellow cabs zigzag along sweeping avenues. Steam rises from sidewalks. Ice rinks throng the winter. Golden leaves sweep past the autumn. Pastrami greets visitors to Katz. Morning awakened by the sun rising over Long Island. Evening, framed by skyscrapers, the sun leaves over the Hudson. Each one a snapshot of a New York, I’ve visited in different seasons. For some, the pleasure of New York is seeing a Broadway show, something I still haven’t done. For others, it is an early morning run in Central Park, for a moment of quiet, away from the relentless traffic. Indeed, no matter what the temperature, whenever I’ve visited, I have usually taken the opportunity for this. Morning runs have an unerring ability to shake away any remnant of jetlag and to burn away the calories of a burger or two, which I inevitably have in New York. The choice of burgers in New York is simply overwhelming. The challenge is to find somewhere new, which hasn’t yet been overwhelmed by queues. I remember visiting Black Tap burgers in TriBeCa, a few years ago. The next time I visited, it had suddenly become very popular, with a huge queue around the block.

I’ve been working independently for several years. Cuemacro’s office is based in Level39, a fintech accelerator in Canary Wharf. Whilst, my focus is on currency markets, many of the startups around me are looking towards using blockchain technology and also some trade cryptocurrencies such as Bitcoin. At this stage, it definitely seems as though blockchain and cryptocurrencies are in the same situation, as Black Tap, with folks queuing around the block for them. I recently went to a course in Level39, by Satoshi Systems, to try understand more about how blockchains and the idea of cryptocurrencies. I am also starting to see whether techniques applicable to trading FX, can also be used for cryptocurrencies. I would recommend looking at some articles by Ed Silantyev discussing how to download market data related to Bitcoin if you’d like to your own analysis. It is important though to draw a distinction between blockchain as a technology, which can allow to different parties to confirm a transaction without a trusted third party and cryptocurrencies like Bitcoin.

Interestingly, in recent weeks there has been a lot of what I would call “established finance” interest in Bitcoin, suggesting we are reaching an inflexion point. Indeed, this is a point which has been made recently by @LDrogen a few times (he’s worth a follow if you’re on Twitter). We might have crossed from a place where cryptocurrencies might be more a tool of the startup arena and the tech community to one where Wall Street could become involved in the trading of cryptocurrencies. Notably the Wall Street Journal published an article saying that Goldman Sachs was thinking about a “new trading operation dedicated to bitcoin and other digital currencies”. There was also a speech from Christine Lagarde, the IMF managing director, gave a speech on “Central Banking and Fintech—A Brave New World?” which included some comments on cryptocurrencies. She noted there are many problems at present with using cryptocurrencies as a medium of exchange at present, notably the massive volatility, the lack of security, the energy usage they need etc. It also an area which is not regulated as yet and as a result it has been used for less than legal activities. It could of course be the case that if a government wanted to make currency cryptocurrencies illegal they could do so, till they introduce regulation there. At the same, Legarde looks forward, and suggests and many of the issues associated with them, could be solved in the future. She even suggests that central banks might end up issuing their own cryptocurrencies, as citizen demand grows.

From a traditional FX trading perspective, the way cryptocurrencies trade against one another and also against fiat currencies, can seem confusing at present, in particular because there are so many different types, many of which only have a fraction of the liquidity of Bitcoin. Even if we consider trading Bitcoin against USD, it is far less liquid at present than most currency pairs. However, this could change over time, as more people use them and trade them with fiat currencies. It may well be a bubble, which Mike Novogratz has suggested (see TV interview here), former Fortress macro manager, but it is still possible to make money on the way up he added. Whether Bitcoin is worth 4,000 or 5,000 USD (or nothing!) is difficult to say, it only has value because other people think it is worth something. However, I do agree with Legarde that there is a bright future ahead for cryptocurrencies and also with Novogratz, who suggested there are trading opportunities in this space. You just need a very strong stomach for the swings and volatility. Now, all that’s left for me to a find a great burger in New York when I visit later this month.. let me know if you have any suggestions. One thing I do know, is that I’ll still be paying for it in greenbacks, rather than Bitcoins. We aren’t quite there yet!