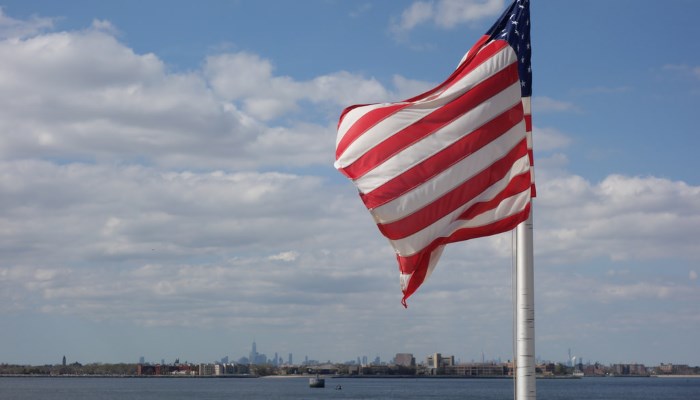 Iain Clark (author of Foreign Exchange Derivatives Pricing: A practitioners guide – Wiley) and I, took a quant approach to analysing the US presidential election in the below short article, which was featured in the Sunday Telegraph. The big question is of course who’s going to win the US presidential election? That’s obviously a difficult question! However, just as important is the question of where we think the market could go in the event of a Trump or Clinton victory? This will at least help us to understand risks around any positions we are holding (and furthermore are we comfortable holding these positions?). To answer this second question in a quantitative way, we examined the FX volatility surfaces for EURUSD, GBPUSD and USDMXN. We also did some similar analysis before Brexit which was published in an SSRN paper here, which goes into more detail about the method we are using here. Based on our analysis of USD/MXN options expiring just after the election, in the case of the expected result going for Hillary Clinton, we expect the Mexican peso to strengthen somewhat from 19.1728 to somewhere in the range 18-19. However, in the case of a Trump victory, we expect a sudden and marked depreciation in the Mexican peso to levels of 20-24 pesos to the dollar – a 4% to 25% devaluation.

Implications of a Trump Victory on FX Markets

Markets are preparing for the US election on Tuesday 8 November. While polls are close, the potential for a surprise Trump victory is still measurable. We have extracted information from the foreign exchange options market to assess the implications of how this uncertainty is priced into several foreign currencies as viewed against the US dollar.

We have analysed the British pound, the Euro and the Mexican peso, with respect to US dollar valuation. By pricing options expiring the day after the election, we are able to back out the market’s statistical prediction for the currency performance, and how it is affected by the information content of the market. Having access to extensive time series data, we show how these statistical distributions, which we can think of as market expectations of post-election FX outcomes, have evolved since early October.

We find the greatest effect on the Mexican peso, perhaps not surprising given Trump’s comments during the campaign on Mexico, such as his pledge to build a wall between the United States and Mexico.

Figures 1, 2 and 3 below show implied market expectations, as viewed on trading dates between Tuesday 11 October and Thursday 3 November inclusive, for the statistical distribution of the currency pair on Wednesday 9 November – i.e. immediately after the election outcome should be known. 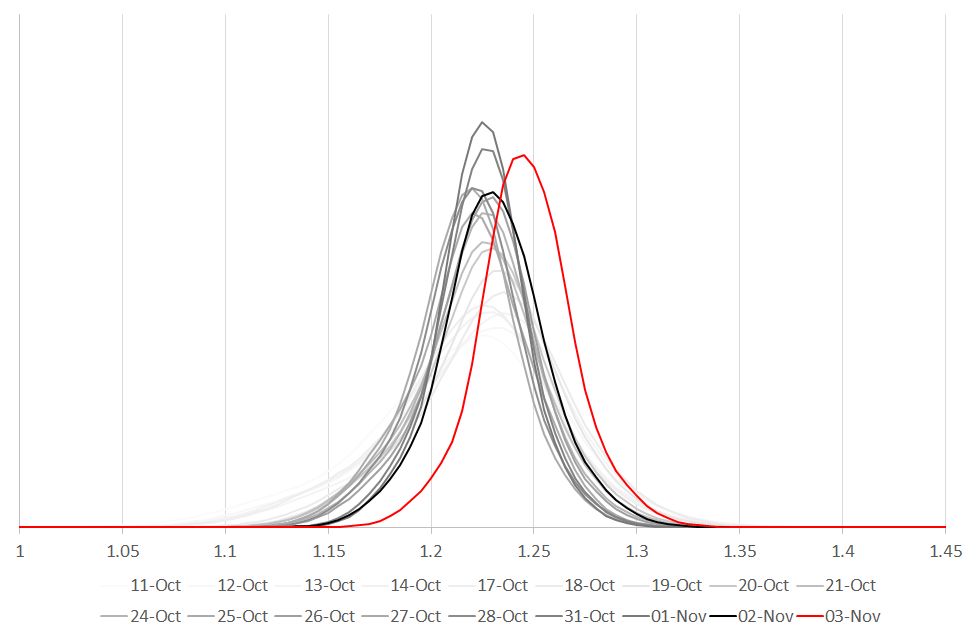 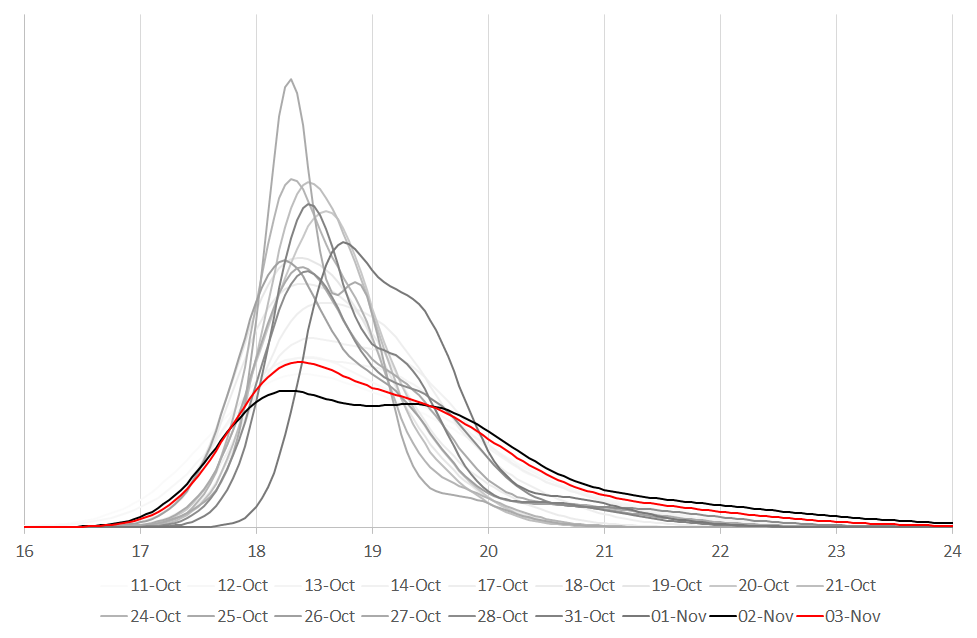 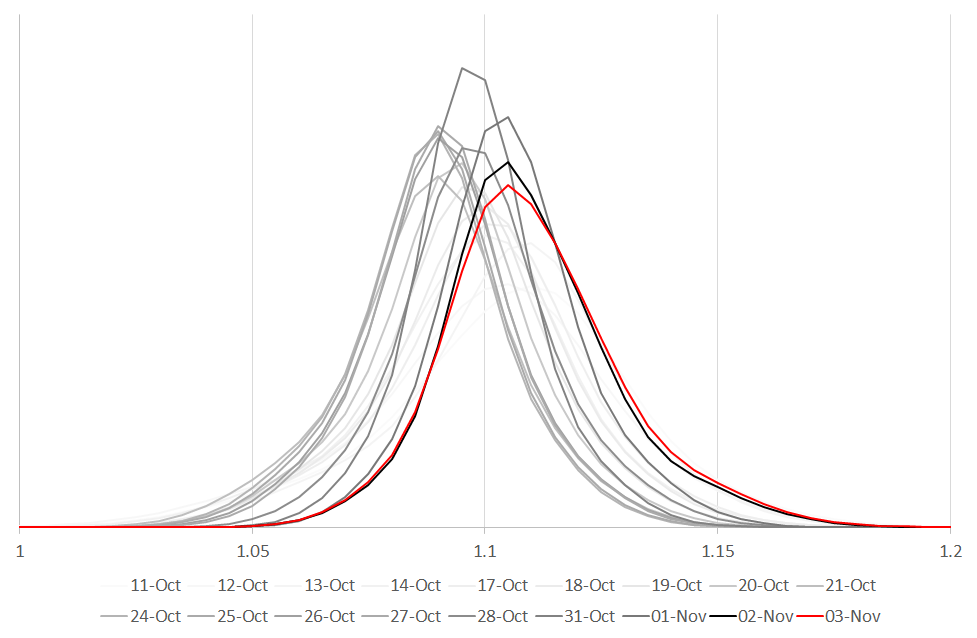 At the time of writing this note, GBPUSD was trading at 1.2461, USDMXN at 19.1728 and EURUSD at 1.1105. For GBP and EUR against the US dollar, it does not appear that investors are hedging directional risk over the election date as much as for the Mexican peso, for which we see two quite clear regimes, worthy of comment. In the case of the expected result going for Hillary Clinton, we expect the Mexican peso to strengthen somewhat from 19.1728 to somewhere in the range 18-19. However, in the case of a Trump victory, we expect a sudden and marked depreciation in the Mexican peso to levels of 20-24 pesos to the dollar – a 4% to 25% devaluation.

We also note, that news events which have been favourable for the Clinton camp have typically been associated with falls in USDMXN (Mexican peso strengthening) and conversely USDMXN has risen on events regarded as positive for Trump’s candidacy. In Figure 4, we give two examples to illustrate this. First, we plot USDMXN in the hours around the first US presidential debate. Voter polls suggested that Clinton had won this (CNBC: Poll: Majority of Voters Say Clinton Won First Presidential Debate 28 September 2016). We note the fall in USDMXN during this period. Second, we plot USDMXN in the hours around FBI Comey’s recent comments about reviving the investigation into Clinton’s e-mails. Here, we note the opposite reaction, a rise in USDMXN. 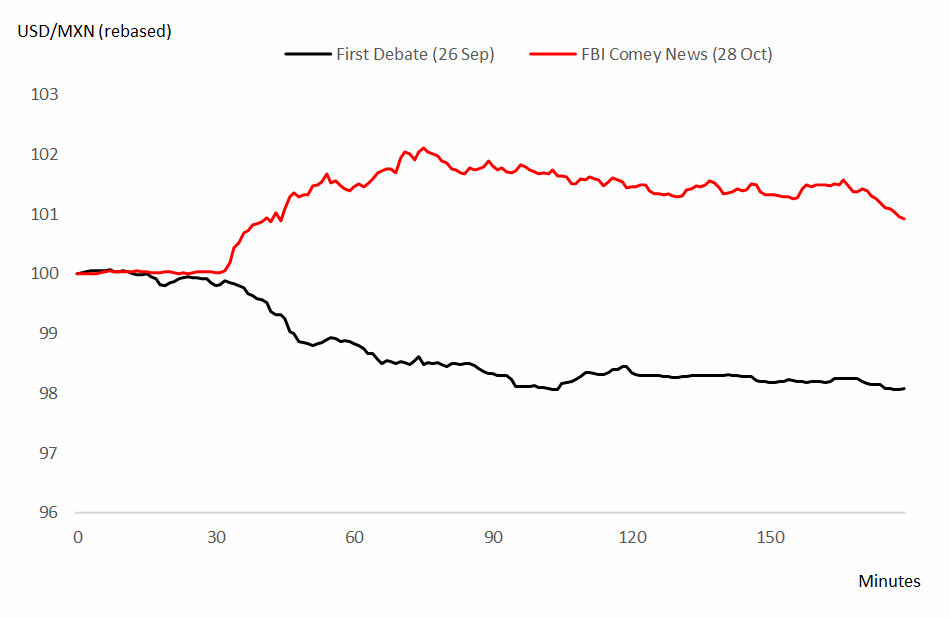 The effect of a Trump victory is therefore, in our opinion, likely to impact the Latin American region significantly more than Europe, which has its own concerns at the moment (see our earlier note on Brexit: Sunday Telegraph, 19 June 2016, Business, pg. 1).

Iain J. Clark is managing director and founder of Efficient Frontier Consulting Ltd., an independent quant consultancy that provides consultancy and training services to banks, hedge funds, exchanges and other participants in the financial services sector. He specialises in FX, FX/IR and commodities, and is an industry expert in volatility modelling and the application of numerical methods to finance.

He has 14 years finance experience including employment as Head of FX and Commodities Quantitative Analysis at Standard Bank, Head of FX Quantitative Analysis at UniCredit and Dresdner Kleinwort, and has also worked at Lehman Brothers, BNP Paribas and JP Morgan. He is the author of Foreign Exchange Option Pricing: A Practitioner’s Guide (Wiley, 2011) and Commodity Option Pricing: A Practitioner’s Guide (Wiley, 2014).

Iain is a hands-on quant technologist as well as an expert quant modeller and strategy consultant, having considerable practical expertise in languages such as C++ (multithreading, Boost, STL), C#, Java, Matlab, Python and R.

Saeed Amen is the founder of Cuemacro. Over the past decade, Saeed Amen has developed systematic trading strategies at major investment banks including Lehman Brothers and Nomura. Independently, he is also a systematic FX trader, running a proprietary trading book trading liquid G10 FX, since 2013. He is also the author of Trading Thalesians: What the ancient world can teach us about trading today (Palgrave Macmillan). Through Cuemacro, he now consults and publishes research for clients in the area of systematic trading. His clients have included major quant funds and data companies such as RavenPack and TIM Group. He is also a co-founder of the Thalesians.

← The right technology, not all of them
Elections, markets and alternative data →